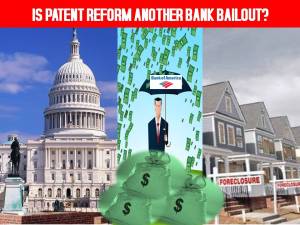 Passage of the America Invents Act  once seemed a fait accompli (it passed the Senate 95-5) and was originally scheduled for a House vote yesterday. The bill has been stalled by growing opposition to a provision buried in the bill that would allow banks to retroactively invalidate business process patents for check processing and similar items – something they have been unsuccessful at in defending patent infringement claims.

Fueling the growing opposition is the message that after banks pocketed the first round of bailouts and did not increase available capital to Main Street and then affirmatively fabricated loan documents to pursue foreclosures, why should Congress give them another bailout. This has triggered an uproar that has generated a rare left-right coalition bringing together Ralph Nader groups and the Christian Coalition as well as liberal Congressman John Conyers (D-MI) and conservative Congressman Dana Rohrbacher (R-CA) (shown on the left).  Rohbrbacher discussed the bill on yesterday’s CLBR and expects the debate to be postponed a week and included a full debate on the constitutionality of the bill.