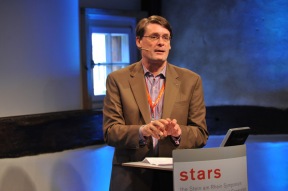 Nigel is President and CEO of Washington DC’s first independent think tank on science and technology policy – or the lack thereof – at the Center for Policy on Emerging Technologies. (C PET) where, in short, he stirs the hornet’s nest to get people thinking!

He has served on the advisory boards of Nanotechnology Law and Business, the Converging Technologies Bar Association, and the World Healthcare Innovation and Technology Congress, and represented the United States on delegations to the United Nations General Assembly and UNESCO, UN Human Rights Council as Special Rapporteur for the Right to Health.

He edited Nanoscale: Issues and Perspectives for the Nano Century (2007); other books include The New Medicine: Life and Death after Hippocrates (1991).

He has been a visiting scholar at UBS Wolfsberg in Switzerland, and was a featured speaker at the Aspen Ideas Festival ,  Global Health Forum and the Swiss STARS conference for young leaders.

Here’s Nigel from a C-PET/Tech Policy Summit 2011 Breakfast on the same topic: