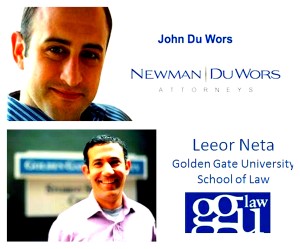 Du Wors and Neta won a major victory last week in the U.S. District Court for the Northern District of California when the court dismissed a claim under the California state spam law as preempted by the CAN-SPAM Act.  I

Cathy Riley demands hundreds of thousands of dollars in damages for receiving a
few emails. She claims that alleged errors in the header information—the “from” and
“subject” lines—violate California’s Bus. & Prof. Code § 17529.5. Specifically, she
asserts that header information identifying the type of business promoted in the email,
rather than the name of the business, in the “from” line is deceptive. For example, she
claims that an email from the American Association of Retired Persons captioned
“BenefitsFor50Plus” was likely to mislead the recipient.

Cathy Riley is represented by her husband Dan Balsam, as well as Timothy Walton.

Balsam is a notorious “spamigator” but who recently won a major victory in the California Court of Appeals in Balsam v Trancos.

John is a trial lawyer. His practice emphasizes intellectual property, business, banking, securities and employment law. John has litigated hundreds of state and federal court cases and commercial arbitrations, throughout the country.

John speaks and writes regularly on legal issues relating to intellectual property and securities litigation. John has served as a chair to the Washington State Bar Association’s Business Law Section’s Publications Committee, and previously served as chairman of the Pasadena Bar Association’s panel on Bankruptcy Business & Commercial Law. An avid lover of the arts, John has volunteered as pro bono legal counsel for The Furious Theater Company, The Lineage Dance Company, and The Washington Ensemble Theater.

Prior to joining Golden Gate, Leeor founded the City of East Palo Alto’s first juvenile diversion program and served for two years as its Executive Director. His government experience includes work at the Office of the State Public Defender where he assisted in the direct appeal of death penalty convictions on behalf of indigent clients. Immediately prior to founding the East Palo Alto Youth Court, Leeor worked for WilmerHale where he litigated the successful state habeas petition of a man sentenced to die in the State of Alabama.

Leeor serves as the 2012-2013 chair of the Public Service Section of the National Association of Law Placement (NALP), the association for legal career professionals and serves on the California State Bar’s Standing Committee on the Delivery of Legal Services.