What is the Podcast Patent?

James Logan holds Patent No.US 8112504 B2 (System for disseminating media content representing episodes in a serialized sequence).  Logan’s idea predates podcasting and was intended to address downloadable entertainment via the Internet to a new kind of MP3 player he was trying to market.  When that failed he switched to the notion of downloaded playlists and then podcasts.  Logan has never podcasted or created any podcasting relating products.

Logan lives in New Hampshire but his company – PersonalAudio – is based in Beaumont, Texas which is part of the federal court system’s Eastern District of Texas.  Despite it being a largely rural area that is anything but a center for high-tech, one in four patent cases are filed in this district because of favorable juries and local rules that make it near impossible to get a frivolous case thrown out quickly.  Personal Audio, like most patent trolls, does not produce anything other than patent lawsuits.

PersonalAudio sued Apple over the issue of playlists and won an $8 million settlement in 2011.

In 2013, PersonalAudio sued Lotzi Digital, Inc., producers of The Adam Carolla Show and several other podcasts on the Carolla Digital Network. Carolla fought back, raising over $475,000 through FundAnything.com, leading PersonalAudio to drop the lawsuit in July 2014 claiming Carolla was not “making significant money from infringing Personal Audio’s patents.” Carolla countersued and sought to invalidate the patent and the parties reached a settlement dismissing the counterclaim without prejudice.

PersonalAudio had better success against CBS, winning a verdict that the patent was valid and $1.3 in damages in September 2014. 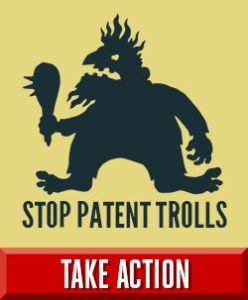 In 2011 Congress passed the “America Invents Act” which created a new procedure known as inter partes review (IPR) in which a party can challenge a patent before the US Patent and Trademark Office (USPTO) if it can demonstrate a reasonable likelihood that they will prevail on at least one claim.  In 2013, the Electronic Frontier Foundation filed an IPR petition on the PersonalAudio patent which was argued before USPTO in December 2014.  There is no word on when a decision will be issued by the USPTO.

In addition, in June 2014 the Supreme Court decided Alice Corp. v CLS Bank International holding that the use of computer technology does not render an otherwise abstract idea as patentable.  As a result, CBS has filed post-trial motions to invalidate the PersonalAudio under the Alice Corp. ruling.

The outcome of each of these matters likely will determine the fate of the PesonalAudio patent.