With the Federal Communications Commission vote on the latest Net Neutrality proposal set for tomorrow, here is a timeline of how we got here.

Congresses passes the Pacific Telegraph Act which guarantees “messages received . . .shall be impartially transmitted in the order of their reception.

FCC rules cable broadband providers are information services not subject to its Title II authority and do not have to share their lines with competing ISPs.  Upheld by Supreme Court.

Now what they would like to do is use my pipes free, but I ain’t going to let them do that because we have spent this capital and we have to have a return on it. So there’s going to have to be some mechanism for these people who use these pipes to pay for the portion they’re using.   Why should they be allowed to use my pipes? The Internet can’t be free in that sense, because we and the cable companies have made an investment and for a Google or Yahoo or Vonage or anybody to expect to use these pipes free is nuts.

FCC issues Net Neutrality Principles under Title I authority. To encourage broadband deployment and preserve and promote the open and interconnected nature of the public Internet, consumers are entitled to

FCC finds that Comcast has unduly interfered with Internet users’ right to access content and applications” of their choice.  Despite lack of sanctions, Comcast appealed.

In 2010 the DC Circuit rules in favor of Comcast.

A Congressional attempt to override the Open Internet Order passes the House of Representatives but falls a few votes shy in the Senate.

New FCC Chairman Wheeler, a former cable industry lobbyist, suggests an openness to a dual pricing model in which ISPs could charge consumers for access and content providers creating fears of a tiered internet.

Last Week Tonight with John Oliver compares entrusting net neutrality with a former cable-industry lobbyist is like using a dingo to babysit your child.  Oliver’s comments and protests such as Internet Slowdown Day lead to over 3 million comments being submitted to the FCC.

The FTC’s complaint alleges that the company failed to adequately disclose to its customers on unlimited data plans that, if they reach a certain amount of data use in a given billing cycle, AT&T reduces – or “throttles” – their data speeds to the point that many common mobile phone applications – like web browsing, GPS navigation and watching streaming video –  become difficult or nearly impossible to use. 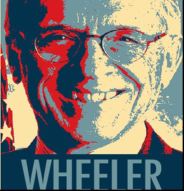 6 thoughts on “Net Neutrality Timeline: How We Got Here”