Among the issues to be addressed are:

President Obama has stated that the rising number of cyber attacks would ‘”probably be one of the biggest topics” during this visit.  The U.S. and China are negotiating what may be the first arms control treaty covering cyberspace under which each country would commit to refrain from any action to cripple the other’s critical infrastructure during peacetime.  The language likely will follow a recent U.N. working group draft which provided:

There comes a point at which we consider this a core national security threat. If China and other nations cannot figure out the boundaries of what is acceptable, we can choose to make this an area of competition, which I guarantee you we’ll win if we have to.

Chinese officials came to Washington last week to meet with National Security Advisor Susan Rice and FBI Director James Comey to lay the groundwork for such an agreement.

The Agreement being discussed with the Chinese, however, would not bar cyber attacks designed to steal intellectual property for which the Justice Department has indicted Chinese officials or attacks like the breach of Office of Personnel Management records which has been linked to the Chinese and which was raised by National Security Advisor Rice during a recent visit to China as a basis for potential economic sanctions.  Reports are that recent discussions on this point have been “frank” and “brutal”.

President Obama has indicated that sanctions that would “put significant strains on a bilateral relationship” are being considered, but hopefully can be avoided.  The sanctions would  freeze the guilty companies’ or individuals’ financial assets and block business transactions with them.

Lu Wei, China’s Internet czar (shown left) who will be attending the US-China Internet Industry Forum, has sent letters to U.S. tech companies asking that they pledge that they will comply with Chinese information security policies—potentially giving Chinese authorities direct access to user data. The pledge requests that they “promise they would not harm China’s national security and would store Chinese user data within the country,” which is similar in ways to the PRISM agreement between technology companies and the US government and raises concerns that the Chinese are seeking backdoors into encrypted data.

The pledge also asks the companies to “promise to accept supervision from all parts of society, to cooperate with third-party institutions for assessment and verification that products are secure and controllable and that user information is protected etc. to prove actual compliance with these commitments.”

at a minimum, we urge that your companies publicly commit on this occasion not to enable government abuses of freedom of expression and privacy in China, as some Western companies have done in the past. Your firms’ robust criticisms of the US government’s mass surveillance practices set a standard that you should not lower for China.

As the Brookings Institute recently explained

United States and China, individually and collectively, are the foundations of the global economy and the main engines of global growth. China is our largest trading partner besides Canada, and has been the fastest growing market for U.S. exports of goods and services for over a decade.

As the charts below indicate, direct investment between the two countries is increasing.

Last week the US-China Business Council (USCBC) and the Paulson Institute sent a letter to President Obama and Chinese President Xi Jinping, signed by 94 American CEOs, supporting a high-standard US-China Bilateral Investment Treaty (BIT), which they contend would further open China’s economy to U.S. businesses and would lead to more U.S. job creation and give greater access to the Chinese market for American firms. 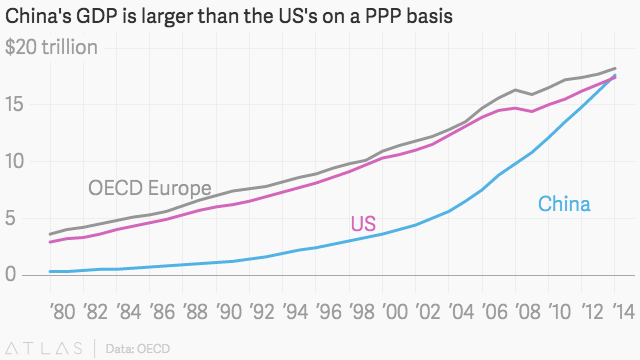 *Of course, on a per-capita basis China’s GDP is only a fraction of the U.S. 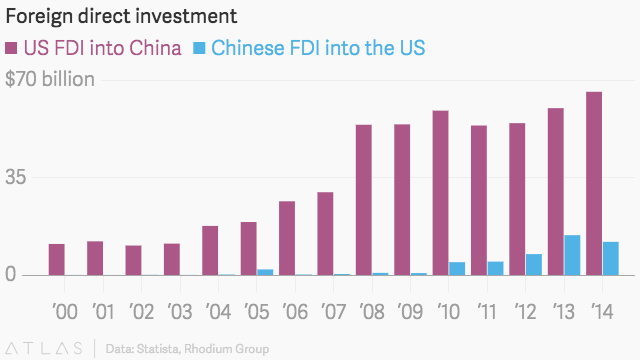