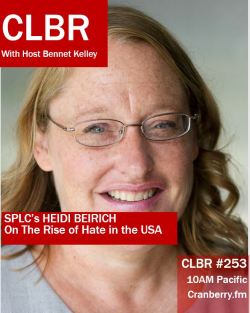 Heidi Beirich leads the SPLC’s Intelligence Project, “one of the most respected anti-terror organizations in the world,” according to the National Review. She is an expert on various forms of extremism, including the white supremacist, nativist and neo-Confederate movements as well as racism in academia. She oversees the SPLC’s authoritative, yearly count of the nation’s hate and hard-line, anti-government groups and is a frequent contributor to the SPLC’s investigative reports and speaker at conferences on extremism. Prior to joining the SPLC staff in 1999, Heidi earned a doctorate in political science from Purdue University. She is the co-editor and author of several chapters of Neo-Confederacy: A Critical Introduction, published by the University of Texas Press in 2008.

The Year in Hate

The number of hate groups in the United States rose for a second year in a row in 2016 as the radical right was energized by the candidacy of Donald Trump, according to the Southern Poverty Law Center’s (SPLC) annual census of hate groups and other extremist organizations, released today.

The most dramatic growth was the near-tripling of anti-Muslim hate groups – from 34 in 2015 to 101 last year.

About the Southern Poverty Law Center

The SPLC was founded in 1971 to ensure that the promise of the civil rights movement became a reality for all.

By the late 1960s, the civil rights movement had ushered in the promise of racial equality as new federal laws and decisions by the U.S. Supreme Court ended Jim Crow segregation. But resistance was strong, and these laws had not yet brought the fundamental changes needed in the South.

African Americans were still excluded from good jobs, decent housing, public office, a quality education and a range of other opportunities. There were few places for the disenfranchised and the poor to turn for justice. Enthusiasm for the civil rights movement had waned, and few lawyers in the South were willing to take controversial cases to test new civil rights laws.

Alabama lawyer and businessman Morris Dees sympathized with the plight of the poor and the powerless. The son of an Alabama farmer, he had witnessed firsthand the devastating consequences of bigotry and racial injustice. Dees decided to sell his successful book publishing business to start a civil rights law practice that would provide a voice for the disenfranchised.

“I had made up my mind,” Dees wrote in his autobiography, A Season for Justice. “I would sell the company as soon as possible and specialize in civil rights law. All the things in my life that had brought me to this point, all the pulls and tugs of my conscience, found a singular peace. It did not matter what my neighbors would think, or the judges, the bankers, or even my relatives.”

His decision led to the founding of the Southern Poverty Law Center.

52 Years Ago – LBJ’s Voting Rights Speech: We Shall Overcome

Australian journalist, author and cyber abuse victim Tara Moss  is the producer, writer and host of a new six-part series exploring cyber abuse.  Cyber Hate seeks to put a spotlight on the issue and examine the science and impact behind the problem.

Providence College, Rhode Island in NCAA Together for Only 4th Time

The State of Rhode Island only has four Division I basketball teams and two of them have qualified for the NCAA tournament – this is the equivalent of twelve California teams making it to the big dance. Good luck to the Friars and Rams.