World Wide Web founder Tim Berners-Lee and his World Wide Web Foundation are using the 30th birthday of the web to not only celebrate this milestone but also to create a live crowd-sourced history of the web and to call for a New Contract for the Web.

Berners-Lee will mark the day with events throughout the day (times are EDT/PDT), starting at CERN in Geneva where the web began.

As if that were not enough, Berners-Lee and Web Foundation co-founder Rosemary Leith will visit the Women’s Technology Empowerment Centre (W.TEC) which works to nurture the next generation of female technology creators, entrepreneurs and leader and Co-Creation Hub (CcHub) where technologists and social entrepreneurs work to solve social challenges in Nigeria.

A Crowd Sourced History of the Web

The Web Foundation is also calling for netizens to participate in a crowd-sourced twitter history of the web.  Each hour over a 30-hour period on March 12 and 13 will represent a year of the web’s history. The Web Foundation will activate the timeline with a tweet at 3AM ET/Midnight PT, representing 1989, the year Sir Tim Berners-Lee invented the web. Then at each consecutive hour, there will be posts from founders, influencers, brands, inventors, and activists around the world, recalling a significant moment from the web’s history.

They are asking netizens to tell the full story of the web by contributing their top web moments. They might be personal milestones, ways the web has changed the world, websites you loved or memes you couldn’t stop sharing.  The content will put the light-hearted with the life-changing.

To contribute, tweet using the following format and hashtags.

To tweet at a time corresponding to a specific year, check their timeline schedule.

A New Contract for the Web 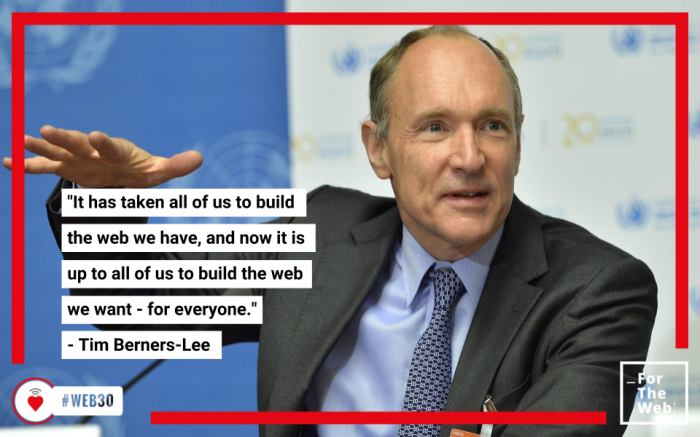 Berners-Lee has grown frustrated by the current state of the web due to:

He is calling for a new contract for the web setting forth principles under which governments, companies and citizens around the world can help protect the open web as a public good and a basic right for everyone.  Under these principles:

The Internet Law Center is a signatory to this Contract.

One thought on “The World Wide Web’s 30th Birthday Party”